Radionuclides in Food and Feed

Levels of radionuclides in food are mainly monitored in relation to the consequences of nuclear accidents and nuclear weapons testing. Sr-90 and Cs-137 are products of nuclear fission of uranium and plutonium - they are present, for example, in the spent fuel of nuclear reactors.

Radionuclides are contained in all forms of life. Their resources in the environment are natural (e.g. formation of the Earth and cosmic radiation), but also consequences of human activity (nuclear weapons tests, accidents at nuclear reactors, waste from nuclear facilities, industry, and healthcare).

During the decay of radionuclides (atoms with an unstable nucleus - radioisotopes), radioactive radiation (alpha α, beta β, gamma γ) is emitted. These radiations have different penetrations and different degrees of biological effects. The dose obtained from the diet represents only a small part of the total dose, the larger part coming from radon in buildings, the bedrock and building materials. Under normal conditions, the largest share of radioactivity in food is caused by natural radionuclides (K-40 and C-14) without negative effects on human health. 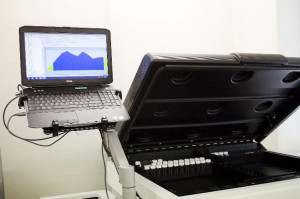 The main risk of artificial radionuclides or natural radionuclides not commonly found in the biosphere is that, due to properties similar to those of common biogenic elements, they may enter and accumulate in certain tissues (e.g. I-131 in the thyroid or Sr-90 in bones and teeth). In the long-term, they damage surrounding cells, which can lead to tumour growth.

Council Regulation No. 3954/87 (EURATOM), as amended, lays down maximum permitted levels of radioactive contamination of foodstuffs and feeding stuffs following a nuclear accident or any other case of radiological emergency.

According to European legislation, the radioactivity of wild mushrooms and their products, which are imported into the EU from third countries, is closely monitored. An updated list of approved foods and radiation doses in each country is published in the EU Official Journal.

ALS also provides testing relating to the Technical Regulation of the Russia-Kazakhstan-Belarus Customs Union (CU) TR TS 021/2011 on Food Safety, which includes requirements for radionuclides Cs-137 and Sr-90 in specific foodstuffs, and holds the authorisation from the Greek Atomic Energy Commission for the determination of radioactive substances in drinking water.