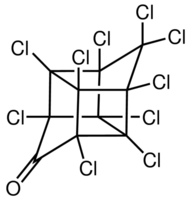 Chlordecone, also known as Kepone, has been used as an insecticide and was introduced in the early 1950’s. The compound is related and structurally similar to Mirex.

Production of Chlordecone started in the 1950’s and it was used until the 1970’s when it was banned in most countries. Unrestricted use of Chlordecone on banana plantation has left the Island heavily polluted. A ban was attempted introduced in 1990 but it lasted until 1993 before the ban was put into effect.

Since 2003 ciltivation of crops on the Island has been restricted by the local government due to the high levels of Chlordecone in the environment.

Chlordecone is classified as can “Reasonably be anticipated to be a carcinogen. Exposure to the compids have a number of negative effects on skin, nervous system, liver and male reproduction.