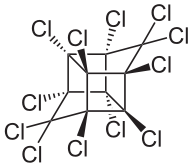 Mirex was used as a insecticide, especially to control ants. The compounds was first synthesized in 1946 but was not used as a pesticide until 1955. Mirex is very similar to Chlordecone and will be oxidised into this compound under the right conditions. Mirex is one of the compounds originally included in the “Dirty Dozen”.

Mirex is toxic to aquatic organisms and moderately toxic to humans. Exposure can cause fatty changes in the liver and can inhibit reproduction amongst other effects. The compound is also a potent endocrine disruptor. It has been concluded that Mirex has carcinogenic risks to humans.